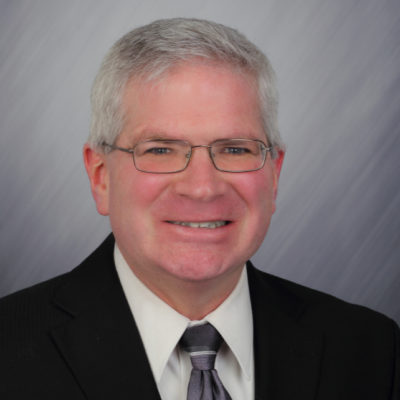 Matthew Bunker was the faculty advisor for Pi Sigma Epsilon, a national sales and marketing co-ed fraternity, from 2003 to 2013. While in this role, the UNI chapter Epsilon Theta won the "Lewis F. Gordon Top Gold chapter" three times. He also received the national advisor of the year award in 2010. Bunker served as the head of the Department of Marketing from January 2014 until July 2020.

Bunker is a strong supporter of combining the real world with the classroom. For example, the students in his marketing research class work with real-world clients to investigate their problems and issues. Each semester is a little different since problems vary across the clients.

Hobbies & Interests
Matthew loves the great outdoors. He will often go for hikes or camping trips, but you can also find him with his nose in a good book.

Due to the work that Matthew's marketing research class does for businesses and organizations throughout the Cedar Valley, Mathew received the Veridian Credit Union Community Engagement Award. He also received the Emerald Literati Network 2009 “Outstanding Paper Award” for his paper titled “Causes and Consequences of Grudge-holding in Service Relationships,”  co-authored with Dwayne Ball (University of Nebraska - Lincoln) and published in the Journal of Services Marketing. Mathew was the national president of Pi Sigma Epsilon from 2013 - 2014, a national sales and marketing fraternity, and was a finalist for the Pi Sigma Epsilon faculty adviser of the year in 2014.